In 2015 the Assessment Panel decided to select a “Quarry of the Year” from the operations who had obtained certification during the year. The first presentation was made by Eric Darlow OBE , the Chairman of the Assessment Panel, at the Annual Meeting of the BAA on 29th June 2015.

His address to the conference on making the presentation sums up the concept of the award very well.

“It can be quite difficult to select a particular quarry as the best of a group of quarries when they have all had to reach the same very high level of operating standards at more or less the same time, to win their certification. Technically that makes them all equal. So members of the panel have to consider other things. For example how they reached that standard in their journey to certification.

“Even then it can be down to individual preferences of panel members so it can be difficult to reach a unanimous decision. However, the quarry chosen this year, following assessment, was considered to have had the highest mountain to climb and it took a very great deal of hard work to climb it.

“The staff at the quarry developed many of their own health and safety systems in house, while maintaining production, and it is a truism that what we work hard to achieve for ourselves we tend to look after and maintain, so the future for health and safety at this quarry should be bright. And so, with the assessment panels hearty congratulations and I am sure the congratulations of everyone here, the winner of the British Aggregates Association’s “Quarry of the Year Award 2015 ” is Sherburn Stone Company’s HELBECK Quarry.” The 2016 Winner of the “Quarry of the Year” was Hugh King & Company’s Hullerhill Sand Quarry at Kilwinning in Ayrshire where they have been producing sand for over 160 years. In 2017 the BAA’s Assessment Panel were delighted to award the “Quarry of the Year” to Laurence Carmichael of  Longwood Quarries  in Blankney, Lincolnshire. Longwood Quarries Ltd has been supplying screened lime and crushed aggregates to the farming, building and construction industry for more than 50 years. 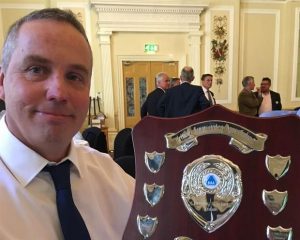 The 2018 “Quarry of the Year Award” went to Springfield Farm, a Buckinghamshe family-owned sand and gravel operation and Quarry Manager,Martin Phillips proudly displays the award. 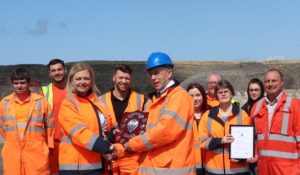 The 2019 “Quarry of the Year Award” went to CCP Building Products’ Aberdo Quarry in Wales (part of SigmaRoc). On 13th August Steve Cole (Chair of the Awards Committee) made the presentation on site to Deputy Quarry Manager Vicky Harrison and the team.