Paul McManus, chairman of the British Aggregates Association and owner of Cloburn Quarry Company, explained to the membership that both he and the officers of the BAA were making every effort to support the membership throughout these difficult times of the COVID-19 crisis.

Paul went on to say that despite the good relationship built up between the industry and HM Treasury following the recent aggregate levy review process held nationwide, it was unfortunate that the Chancellor had not so far chosen to suspend aggregate levy payments. This despite HM Treasury putting forward many other beneficial measures to help industry.

A letter to the Chancellor has been sent asking him to clarify and put right the anomaly of aggregate levy payments at this time.

The question of loans being provided by banks is always a contentious one even when it is under a scheme supported by the government; and those companies with healthy balance sheets need to be aware that banks may interpret the rules different to perhaps government intended. Members can seek the advice of the association who are supported by organisations in the legal profession along with the CBI.

Mr McManus paid tribute to those independent quarry operators throughout the country who closed operations forthwith, despite the mixed messages coming from Westminster and Holyrood governments about whether or not construction work should cease. He believes it is the right thing to do in order to protect their workforce and families.

For his own company, like so many others, the virus has had a massive effect economically and he has put in place emergency measures and cash preservation policies in order to ensure survival. He explained that at the same time Cloburn Quarry Company was committed to maintaining all payments to suppliers, many of whom rely on the quarry for their survival. As such many have received accelerated payments and he hopes to continue that policy for as long as the crisis continues.

He concluded his statement by confirming his full support to members during these troubled times including any help or advice on the procedures that are being introduced by government to help business.

Full text of Statement of Support to Members

The Executive of the British Aggregates Association (BAA) has reached a settlement with the UK Government in respect of all aspects of the Aggregates Levy litigation in the UK and EU. This announcement was formally made by HM Treasury Exchequer Secretary, Robert Jenrick MP today in a Written Ministerial statement.

The Aggregates Levy has been largely unchanged since its introduction in 2002. The government will now conduct a comprehensive review of the levy over the next year, working closely with the Scottish Government, and consulting the Welsh Government and Northern Ireland Executive throughout. The review will be comprehensive, looking at the latest evidence about the objectives of the levy, its effectiveness in meeting that objective, and the design of the levy, including the impact of devolution.

The Terms of Reference for the review will be published in Spring 2019 and an expert working group will be established to inform it. The review will aim to conclude by the end of 2019.”

BAA was formed in 1999 to protect the interests of the UK privately-owned SME aggregate producers and to oppose the government intentions to introduce a highly unpopular and unjustified stealth tax on an already highly regulated industry with internationally renowned environmental credentials. Following introduction of the levy in 2002 we have challenged the government both in the UK and EU through a series of legal claims which were ongoing until today’s agreement with HM Treasury.

“It is entirely due to the efforts of BAA and its members acting on behalf of the overall aggregate industry in Great Britain and Northern Ireland that we have now reached this point. We have finally persuaded HM Treasury of the need for a comprehensive root and branch re-visit and review of the Levy, its design and objectives; and look forward to us being a principal participant in the expert working group”. 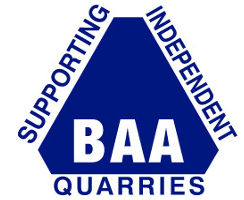 Quarries are once again supplying fine aggregates to local authorities and highway agencies to treat iced up roads and pavements.
Quarry grit was the traditional method of dealing with snow and ice before the use of salt became commonplace. Although it does not melt ice in the same way as salt, it is environmentally friendly and ideal for providing grip on slippery surfaces. Assistance is also available to the environment agencies to supply both good sand, and bagged sand for food defences

Photos from the Seminars 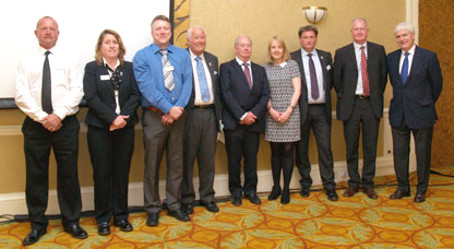 Delegates at the 2017 Annual Gathering

Quarries are once again supplying fine aggregates to local authorities and highway agencies to treat iced up roads and pavements.

Quarry grit was the traditional method of dealing with snow and ice before the use of salt became commonplace. Although it does not melt ice in the same way as salt, it is environmentally friendly and ideal for providing grip on slippery surfaces. Assistance is also available to the environment agencies to supply both good sand, and bagged sand for flood defences.

BAA Director Robert Durward revisits some of the problems brought about by the Aggregates Levy.
Published in Quarry Management, January 2017

We have successfully overcome two challenges (from the Commission supported by the UK government) to appeals lodged at the EU General Court. BAA have written to Chancellor Philip Hammond restating our preference for a negotiated settlement.